close menu X
FREE SHIPPING to U.S. Addresses on orders of $99 or more.
Home > The Art > Gazing
My AccountCart: (0) I don’t think it’s a historical accident that Impressionist painting began in France. There are distinctive French vistas that are so lyrical, so vibrantly drenched in radiant light, that they
virtually compel the brush to dance over the canvas with the verve of a Renoir or Manet.

Gazing takes us to just such an exquisite French locale. A lithe, graceful young lady, dressed in white chiffon and wearing a bonnet, gazes out across a glittering lake toward a distant village. She stands under a single, slender tree. The basket she carries suggests some forgotten purpose; for the moment, she is entirely absorbed in the vista that captures her gaze.

The mood is one of breathless anticipation. It is not only the girl who holds her breath in order to enter into the perfect tranquility of the moment; it is us as well. As she gazes at far horizons, we, in turn, gaze at her, hoping to join in her beautiful world.

I adopted my Impressionist persona, and developed the vivid, animated style so that I could create poetic effects that lift my audience beyond the mundane world we live in. Here, we can
join a young girl gazing at a timeless vista. 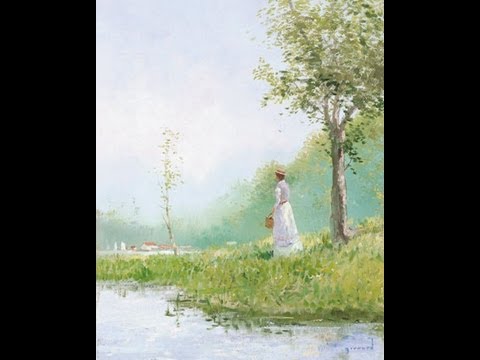